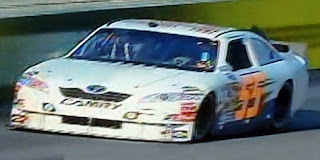 Michael McDowell picked up the 6th last-place finish of his NASCAR Sprint Cup Series career in Saturday’s Irwin Tools Night Race at Bristol when his unsponsored #55 PRISM Motorsports Toyota fell out with engine troubles after completing 16 of the race’s 500 laps.

McDowell qualified 35th for Saturday’s race, beating 9 other teams not locked-into the field based on Owner Points from a competitive 50-car entry list. For the first time since Pocono in August, McDowell would also be joined on race day by his PRISM Motorsports teammate in the #66. This time, the driver was Scott Riggs, who successfully rebounded from a DNQ at Michigan, scene of his first attempt for the team. The two unsponsored Toyotas fell out in 16-lap intervals from the green flag with McDowell falling out first.

Absent from the starting field was current LASTCAR Cup Series leader Joe Nemechek, whose #87 failed to make the race for the first time since Darlington in the spring. Nemechek was second-fastest of the six cars that missed the race, behind defending LASTCAR Cup champion Dave Blaney who was brought on board owner Tommy Baldwin’s #36 at the last minute. Blaney’s ride opened up after Casey Mears made his debut in Germain Racing’s #13 a week early due to a driver switch with Max Papis between Friday’s practice sessions.