TRUCKS: Jones Crashes Out At ORP 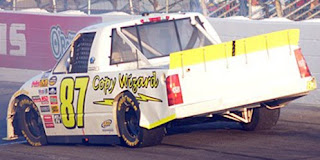 Chris Jones picked up the 3rd last-place finish of his NASCAR Camping World Truck Series career in Friday’s AAA Insurance 200 at O’Reilly Raceway Park when his #87 Copy Wizard Chevrolet was involved in a single-truck accident on lap 7.

Jones qualified 20th for the race at a speed of 106.549 mph, fourth among the “go-or-go-home” drivers, but was forced to start in the back for missing the driver’s meeting. Unfortunately, things did not go much better in the race when he lost control of his truck in turn one and hit the outside wall, ending his night. Current LASTCAR Truck Series leader, who moved to teammate Shane Sieg’s #39, finished 35th when he fell out with electrical problems under the ensuing caution.

STATS AND FACTS
*The finish was the first for Jones in more than two years, dating back to when he fell out with a vibration two laps into the 2008 Qwik Liner Las Vegas 350 at Las Vegas. At the time, Jones was driving for the #0 team that racked-up a series-leading 13 last-place finishes in the 2008 Truck Series season. Interestingly, Jones was the only driver to finish a Truck race for the team that year when he finished 10 laps down in the 2008 Kroger 200 at Martinsville.
*Jones had never before finished last at ORP; his only other last-place finish in the series came in the 2008 Cool City Customs 200 at Michigan.
*It was only the second time in Truck Series history that this number has finished last, dating back to when the late John Nemechek lost an engine on his Burger King Chevrolet 3 laps into the 1995 Pizza Plus 150 at Bristol.