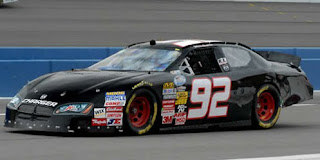 Dennis Setzer picked up the 10th last-place finish of his NASCAR Nationwide Series career in Friday’s Dollar General 300 powered by Coca-Cola at the Chicagoland Speedway when his unsponsored #92 K-Automotive Motorsports Dodge fell out with ignition problems 3 laps into the 203-lap race.

Setzer just squeezed into the field for Friday’s race, securing the 43rd and final starting spot at a speed of 173.986 mph. The run bumped Jeremy Clements’ #04 out of the field by just two tenths of a second, sending Clements home along with three other teams, including Setzer’s owner, Brian Keselowski, in his #26.

Setzer fell out three laps into the race, followed one lap later by Johnny Chapman, who drove for his sixth different team in as many Nationwide Series starts in 2010. Chapman’s most recent last-place finish came while driving Setzer’s #92 at Bristol, which tied him with Tommy Houston and Brad Teague for third in the all-time Nationwide Series rankings.

Setzer, meanwhile, has not only moved up to 5th, just two finishes behind Chapman, but has tied Chapman’s 2009 season total of eight last-place finishes during his time driving for MSRP Motorsports. It took Chapman 31 races to reach that mark, but only took Setzer 18.

STATS AND FACTS
*This is the first time in Nationwide Series history that both Setzer and the #92 have finished last at the Chicagoland Speedway. It is also the second-straight year a driver finished last because of ignition problems: Mark Green’s #49 had that happen after one lap in 2009.