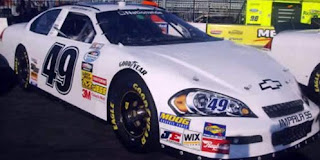 Mark Green picked up the 9th last-place finish of his NASCAR Nationwide Series career in Saturday’s Missouri-Illinois Dodge Dealers 250 at the Gateway International Raceway when his unsponsored #49 Jay Robinson Inc. Chevrolet fell out with electrical problems after completing 2 of the race’s 200 laps.

Green qualified 30th at a speed of 130.905 mph, beating eight other teams that were not locked-into the field on Owner Points. In the race, Green went behind the wall first on a night where the entire Bottom Five failed to complete more than eight laps. Nationwide Series leader Dennis Setzer fell one lap short of securing his 9th finish of 2010, having also finished next-to-last in the Truck Series race that same day. Johnny Chapman, who edged Setzer in the Truck race, finished 40th.

STATS AND FACTS
*This was owner Jay Robinson’s first last-place finish in the 2010 Nationwide Series schedule; the team’s most recent last-place finish also came with Green in last fall’s O’Reilly Challenge at Texas.
*Robinson’s #49 had not finished last in a Nationwide Series race at Gateway since Kertus Davis pulled behind the wall after the first lap of the 2008 Missouri-Illinois Dodge Dealers 250, which was also won by Carl Edwards.
*With the finish, Mark Green becomes the first driver other than leader Dennis Setzer to finish last more than once in 2010. However, since Green’s other finish at Charlotte came with Mary Louise Miller’s #70 team, no team has more than one last-place finish in 2010 other than K-Automotive’s #92.