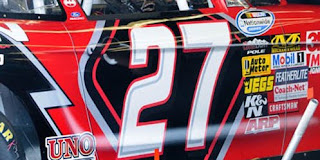 Jennifer Jo Cobb picked up the 3rd last-place finish of her NASCAR Nationwide Series career in Friday’s Subway Jalapeno 250 at the Daytona International Speedway when her #27 DriverBoutique.com Ford was involved in a two-car crash after 5 of the race’s 102 laps.

Cobb and Kenny Wallace were the only two cars unable to make qualifying runs for Friday’s race, leaving the two 41st and 42nd in the field based on owner points. One spot ahead of Cobb was Mike Curb teammate Johnny Chapman in an unsponsored #43. Unfortunately, Cobb was unable to handle how loose her new car got in the draft, sending her in a spin through turn four that collected Chapman in a fiery crash. Both drivers escaped unscathed, but Mike Curb’s cash-strapped operation will likely have to suspend its Nationwide teams for the next few weeks. Cobb will focus on her remaining season in the Camping World Truck Series. Chapman remains one finish short of 2nd in the all-time Nationwide Series LASTCAR rankings.

Friday marked the on-track debut of the Nationwide Series’ “next-generation” chassis, limiting the entry list to just 44 teams. Noticeably absent were LASTCAR leaders K-Automotive Motorsports and Dennis Setzer, who apparently were unable to accrue enough funding to secure their own new car. Team owner Brian Keselowski was also without a ride; the #26 was driven to the outside-pole by Parker Kligerman with Bob Keselowski as the listed owner.

You have an effect on is totally appreciative and full of interest.link