CUP: Nemechek Back In The 2010 Lead After Rear Gear Problem At Chicago 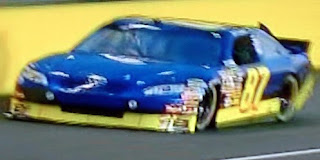 Joe Nemechek picked up the 22nd last-place finish of his NASCAR Sprint Cup Series career in Saturday’s Lifelock.com 400 at the Chicagoland Speedway when his unsponsored #87 NEMCO Motorsports Toyota fell out with rear gear problems after 20 of the race’s 267 laps.

Nemechek started out as the weekend’s biggest surprise when he turned in the fastest speed in Friday’s opening practice session. Unfortunately, the speed did not attract any sponsors, and the #87 was only 28th in qualifying at a speed of 180.929 mph.

Before Saturday’s green flag, Nemechek fell to the rear along with two other unsponsored teams - Casey Mears in Tommy Baldwin’s #36 and Mike Bliss in Braun Racing’s #32 - who were also among the top ten in the first practice session. By the time leader Jimmie Johnson started lapping cars on the 20th circuit, Nemechek was behind the wall, followed by Mears, Bliss, and Papis in the following 30 laps.

For the third time in 2010, both PRISM Motorsports cars failed to qualify for the race, including the #66 of defending LASTCAR Sprint Cup champion Dave Blaney, who again trails Nemechek by one finish in both the Driver and Team Rankings.

STATS AND FACTS
*The finish ties Nemechek with his part-time teammate Jeff Fuller for 4th in the all-time LASTCAR rankings. Nemechek is also just four finishes away from tying Derrike Cope for 2nd in the all-time Cup Series rankings.
*Nemechek had not finished last in five races, dating back to last month’s Gillette Fusion ProGlide 500 at Pocono.
*Nemechek and the #87 had never before finished last in a Cup race at Chicago, nor had any Cup driver finished last there because of a rear gear problem.