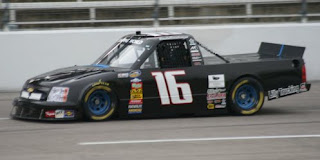 J.C. Stout picked up the 1st last-place finish of his NASCAR Camping World Truck Series career in Saturday’s VFW 200 at the Michigan International Speedway when his #16 Fuel Doctor Chevrolet fell out with ignition problems 6 laps into the 100-lap race.

Stout qualified 31st for the race at a speed of 166.509 mph, second slowest among those not locked-into the field based on Owner Points. The finish came in Stout’s 28th series start. The 25-year-old driver has no other last-place finishes in NASCAR’s top three series, which currently encompasses eight additional Nationwide Series starts from 2008-2009.

Last-place leader Mike Garvey finished 31st, having fallen out 24 laps into the race with handling problems.

STATS AND FACTS
*The race marked just the fourth time that the #16 had ever finished last in a Truck Series race (twice with Jack Sprague, once with Mike Bliss). The number had never before finished last at Michigan.
*Stout is the first Truck Series driver to finish last with ignition problems since Butch Miller fell out three laps into the 2008 Camping World 200 at Gateway.