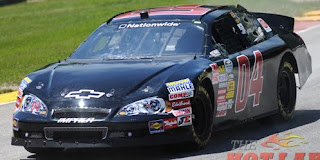 Kevin Lepage scored the 9th last-place finish of his NASCAR Nationwide Series career in Saturday’s inaugural Bucyrus 200 presented by Menards at Road America when his unsponsored #04 JDavisMotorsports.com Chevrolet fell out with rear end problems after 1 of the race’s 50 laps.

Lepage qualified in the 43rd and final starting spot at a speed of 94.055 mph, but fell out of the race after completing just one lap. Both Andy Ponstein, driving the series leading #92 K-Automotive Motorsports Dodge and Josh Wise in Specialty Racing’s #61 qualified ahead of Lepage and followed the #04 into the garage on the same lap. This snared Lepage the 43rd and final finishing position by virtue of his qualifying run and ended the #92 team’s two-race streak.