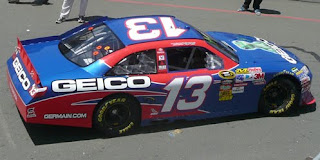 Max Papis scored the 3rd last-place finish of his NASCAR Sprint Cup Series career in Sunday’s Toyota / Save Mart 350 at the Infineon Raceway when his #13 GEICO Toyota was involved in a grinding four-car accident ended his day 65 laps into the 110-lap race.

Papis came into the weekend as driver of the fastest car outside the Top 35 (12th overall) in Friday’s practice session. However, the track was much slicker in qualifying, dropping him to the 29th starting spot. Still, only three “go-or-go-homers” outpaced him that afternoon: Boris Said (17th), David Gilliland (26th), and Joe Nemechek (28th).

In the early stages of the race, Kyle Busch was the first car to go behind the wall following his lap 10 accident in the Esses, followed on lap 16 by P.J. Jones, in a 2nd Robby Gordon-owned car. First Busch, then Jones returned to the track more than 10 laps down, leaving last place up for grabs. Jones ended up the lower-finishing of the two when electrical problems left him with a 41st-place finish, but Jones was unable to score his second consecutive last-place finish at Sonoma.

Last-place leaders Joe Nemechek and Dave Blaney were both able to complete more than half the race before mechanical problems took them out. Nemechek secured sponsorship from former team owner Rick Hendrick, whose HendrickCars.com graphics were put on the owner-driver’s Toyota. Dave Blaney’s unsponsored PRISM Motorsports ride was apparently able to use the technical support of part-time teammate Michael Waltrip after Waltrip’s “Sponsafied” #55 failed to qualify on Friday. It was the first time Blaney was able to complete the majority of a Cup race since Las Vegas.

All the while, Papis fought to work his way up the pack and avoided involvement in all the early-race incidents. Although Papis struggled in the early stages, running 35th on lap 47 after saving his car from a spin with Tony Stewart, the Germain Racing team was keeping up with the adjustments and the Italian driver was soon able to keep the same pace as the dominant car of Jimmie Johnson. Unfortunately, Papis’ come-from-behind performance was cut short when a sluggish lap 66 restart by the leaders sparked a four-car chain-reaction accident behind them at Sonoma’s notoriously-narrow frontstretch. Papis and Martin Truex, Jr., unable to avoid the wreck, received the worst damage and neither were able to return to the track.

The race marked Papis’ second consecutive last-place finish and second-ever on a road course. He was involved in an equally-vicious accident with just 9 laps to go in the 2008 Centurion Boats at the Glen.

STATS AND FACTS
*This was the second time the #13 had ever finished last in a Cup race at Infineon. Jerry Nadeau’s FirstPlus Financial Ford started on the outside pole in the 1998 Save Mart / Kragen 350, but after running off-course in the second corner, Nadeau was taken out in a single-car accident in the Esses after 13 laps.