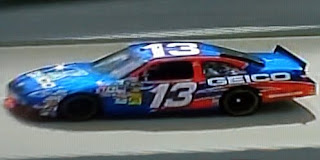 Max Papis picked up the 2nd last-place finish of his NASCAR Sprint Cup career in Sunday’s Heluva Good! Sour Cream Dips 400 at Michigan International Speedway when his #13 GEICO Toyota fell out with overheating problems after completing 8 of the race’s 200 laps.

Papis qualified 38th for Sunday’s race at a speed of 185.821 mph, beating five other cars who were not locked into the field. As this was one of the handful of races Papis was running without full funding, the #13 pulled behind the wall during the opening green-flag run, besting 42nd-place Todd Bodine by 12 laps. Bodine, still 6th in the LASTCAR Sprint Cup standings, has yet to score a last-place finish in 2010.

STATS AND FACTS
*Papis’ only other last-place finish in the Sprint Cup Series came in his 2nd series start, when his #70 HAAS Automation Chevrolet was involved in the massive multi-car crash that marred the finish of the 2008 Centurion Boats at the Glen.
*It was the first last-place finish for Germain Racing in the Cup Series.
*The #13 had not finished last in a Cup race since Greg Sacks’ unsponsored Dodge fell out with brake problems 5 laps into the 2005 Pennsylvania 500 at Pocono.
*The #13 had never before finished last in a Cup race at Michigan.
*A driver had not finished last at Michigan due to overheating problems since all-time NASCAR last-place leader Derrike Cope’s #74 Howes Lubricator / Royal Admin. Dodge fell out 12 laps into the 2006 3M Performance 400.