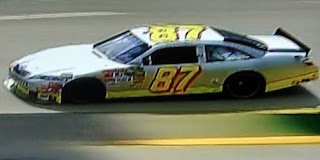 Joe Nemechek scored the 21st last-place finish of his NASCAR Sprint Cup career in Sunday’s Gillette Fusion ProGlide 500 at the Pocono Raceway when his unsponsored #87 NEMCO Motorsports Toyota fell out with transmission problems after completing 11 of the race’s 204 laps.

Nemechek qualified 30th, but was off the pace as the field neared the lap 15 competition caution. Four laps before that caution fell, Nemechek went behind the wall under green. Chad McCumbee, making his first start since the 2008 Ford 400 at Homestead, missed his first career last-place finish when he parked Larry Gunselman’s #64 following the lap 20 restart. Geoffrey Bodine followed suit the next lap, ending his first Cup race in nearly six years. Bodine has 11 last-place finishes in the Cup Series, most recently in the 2002 New England 300 at New Hampshire.

Nemechek and NEMCO Motorsports have both regained the lead in the LASTCAR driver and team rankings.