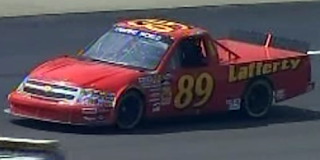 Chris Lafferty picked up the 1st last-place finish of his Camping World Truck Series career in Friday’s Dover 200 at the Dover International Speedway when his #89 Lafferty Performance Chevrolet fell out with an oil leak after completing 1 of the race’s 204 laps.

Lafferty’s truck was wrecking-loose in qualifying, winding up 33rd in the 36-truck field with a speed of 138.233 mph. Although this poor handling was likely a reason behind his early exit from his third career Truck Series start, an oil leak was the official reason listed.

As the sixth different driver to finish last in as many races in the 2010 season, the Driver’s Standings remains a dead heat with no repeat last-placers so far this year. However, as Mike Harmon finished last in Lafferty’s truck in Atlanta, the #89 team now takes the lead in the Team Rankings.

STATS AND FACTS
*This was the first time the #89 has ever finished last in a Truck Series race at Dover.
*This was just the third time in Truck Series history that a last-place finisher fell out with an oil leak. Mike Hurlbert was the first during the 1995 Maxx Race Cards 200 at Portland; the other was Loni Richardson in the 2004 Sylvania 200 at New Hampshire.