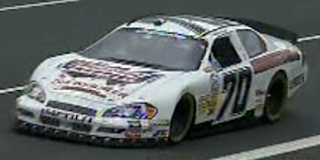 Mark Green picked up the 8th last-place finish of his Nationwide Series career in Saturday’s Tech-Net Auto Service 300 at the Charlotte Motor Speedway when his #70 WebsterRadiator.com Chevrolet was involved in a multi-car crash on lap 3 of the 203-lap race.

Green qualified a respectable 25th for Saturday’s race at a speed of 181.671 mph, fifth-fastest among the drivers not locked-into the field. However, three laps into the race, Paul Menard spun Steve Arpin out of the top 10 in turn one, and Green was in the wrong place at the wrong time. Green lost control in the high groove and stuffed Mike Wallace into the outside wall, causing extensive right-side damage to both cars. While Wallace returned to the race, Green did not, giving him his first last-place finish of 2010. Green did, however, drive in relief of Brendan Gaughan later in the race as Gaughan was suffering from carbon monoxide poisoning after another early crash.

STATS AND FACTS
*This was Green’s first last-place finish since the 2009 O’Reilly Challenge at Texas, when he and the #49 GetMoreVacations.com Chevrolet went behind the wall two laps into the 200-lap race with handling problems. That finish was the fifth Green picked up that year alone. Also in 2009, Green was the one who ended Johnny Chapman’s three-race last-place streak at Chicagoland after Chapman failed to qualify.
*It was the first time the #70 had finished last at Charlotte since Bosco Lowe lost the engine of his Bailey / Temple Oldsmobile 9 laps into the 1984 Mello Yello 300.
*The #70 had not finished last in a Nationwide Series race since Justin Diercks lost the rear end of his BIOMET/ForeTravel Chevrolet in the 2007 Federated Auto Parts 300 at the Nashville Superspeedway. Like Green’s car on Saturday, Diercks’ car was also owned by Mary Louise Miller.

Technically, Green *did* return to the race - he stepped into the #62 after Brendan Gaughan had his carbon monoxide poisoning episode.

Oh, I didn't know that, CRZ. I had to leave before the end of the race. Thanks for the heads-up. :)