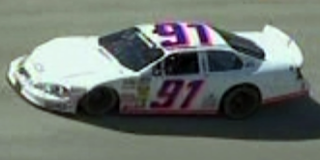 David Gilliland picked up the 3rd last-place finish of his Nationwide Series career in Saturday’s Heluva Good! 200 at the Dover International Speedway when his unsponsored #91 D’Hont Humphrey Motorsports Chevrolet fell out after 1 of the race’s 205 laps with ignition problems.

For better and for worse, Gilliland’s qualifying run was the day’s biggest surprise. His first timed lap was a blistering 154.606 mph, good enough to put his Chevrolet 8th in the starting grid. However, when he tried to get a little more on his second lap, his right-front tire cut down in turns three and four, sending his car hard into the outside wall. With the race hours away, Gilliland was forced to a backup car which ran just one lap before it pulled behind the wall.

Last-place leader Dennis Setzer was not in Saturday’s race, while owner Brad Keselowski finished 42nd, four laps ahead of Gilliland, in the #92 that continues to lead the Team Rankings. Johnny Chapman, still one finish away from tying Ed Berrier for second in the all-time series rankings, finished 39th driving Derrike Cope’s #73.