I am proud to announce that, starting this weekend at Dover, LASTCAR will now be tracking the last-place finishers of not only the Sprint Cup Series, but also the Nationwide Series and the Camping World Truck Series.

To complement the rankings for both series, which can now be accessed with the Sprint Cup stats on the right side of this page, I’ve added this article to introduce how the last-place competition in these two divisions has taken shape.

Included below are the rankings for the first part of the 2010 season, current through the most recent events at Darlington (Nationwide) and Kansas (Trucks). Enjoy! 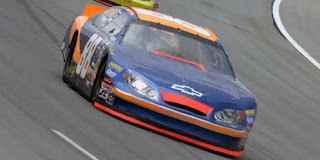 In the nine years since, the battle for the last-place lead has intensified. In 2002, Means Racing scored six last-place finishes, reminiscent of the nine Jimmy Means’ operation racked up in the 1992 Winston Cup season. A few years later, MSRP Motorsports, owned by Phil Parsons, racked up a whopping 21 last-place finishes during the 70 Nationwide Series races held from 2008 through 2009. Eight of MSRP’s twelve finishes during the 2009 season were with driver Johnny Chapman, who in doing so amassed the second-most finishes by a single Nationwide Series driver in one season.

As of now, Chapman’s season record is still eclipsed by that of current all-time LASTCAR Nationwide Series leader Jeff Fuller, who scored 11 of his 24 career last-place finishes in the 2004 season alone. As owner Joe Nemechek’s teammate, Fuller’s 2004 campaign for NEMCO Motorsports (pictured) shattered Fuller’s own record from 2003, when he scored seven finishes. Thanks in part to Fuller, NEMCO still holds the LASTCAR owner’s record of 13 finishes in a single season; MSRP came up one finish short of tying the record in 2009.

In addition, both Fuller and Chapman are the only two drivers to score three consecutive last-place finishes in the Nationwide Series: Fuller’s came at Rockingham, Las Vegas, and Darlington in 2004; Chapman’s were at Milwaukee, New Hampshire, and Daytona in 2009.

In 2010, MSRP Motorsports has changed hands; its #90 and #91 now run under the new D’Hont Humphrey Motorsports team. Driving Johnny Chapman’s old #90, Danny O’Quinn, Jr. picked up D’Hont Humphrey’s first - and, so far, only - last-place finish with a brake failure at Nashville.

Meanwhile, Chapman is now one of the drivers for Brian Keselowski’s K-Automotive Motorsports team, which currently leads the 2010 Owner’s Standings with six of the season’s first ten last-place finishes (five for the #92, one for the #96). Chapman scored the 12th last-place finish of his career for K-Automotive at Bristol, moving him to within one finish of tying Ed Berrier for 2nd on the all-time list. Teammate Dennis Setzer’s four finishes for K-Automotive have given him the lead in the 2010 Driver’s Rankings. 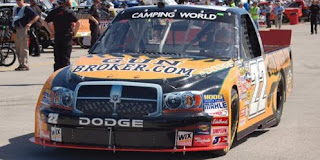 Since its first full season of competition in 1995, five drivers have led the rankings for the most last-place finishes in the NASCAR Camping World Truck Series.

Although T.J. Clark and John Kinder were tied at the end of 1995 with three finishes apiece, it was a third driver, Mike Hurlbert, who passed them both when he scored five finishes in 1996. Combined with a finish of his own in 1995, Hurlbert’s 1996 season moved him into the overall lead with a total of six. Three years later, Phil Bonifield broke Hurlbert’s driver and team season records, racking up the first six last-place finishes of his career driving the #23 Chevrolet in 1999. While Bonifield’s ‘99 season only tied Hurlbert for the overall lead, three more finishes in 2000 moved him into the top spot with nine. Bonifield extended his lead to 11 in 2003, setting a mark that stood for five years.

In 2008, Wayne Edwards crept into the picture and tied Bonifield’s mark. Edwards scored just three last-place finishes in ‘08, but had also picked up at least one last-place finish in six of the eight seasons that preceded it. Edwards’ 2008 campaign came while driving the #0 Chevrolet, which changed hands between owners Gene Christensen and Bobby Dotter. Between the two owners, the #0 racked up a Truck Series record 13 last-place finishes (9 for Christensen, 4 for Dotter). The #0 also became the only team in the series to have scored three-straight last-place finishes, which came at Michigan, Milwaukee, and Memphis.

Edwards finally broke his tie with Bonifield when his 12th finish came in the 2009 season opener at Daytona while driving the #22 Dodge for owner Dwayne Gaulding (pictured). A 13th came that summer at Bristol in the #47 Chevrolet owned by Andy Hillenburg, setting Edwards’ current all-time record for the Truck Series. Currently third in the rankings with eight finishes is Johnny Chapman, who scored two of his finishes while sharing driving duties with Edwards in the #0 during the 2008 season. The prolific Chapman is the very driver who is also third in the Nationwide Series rankings with 12 finishes.

In 2010, the battle for the LASTCAR lead in the Truck Series has stabilized - for now. Neither Wayne Edwards nor Johnny Chapman have yet to qualify for a Truck Series race this season and all five races run so far have had different last-place finishers who drove for five different teams.