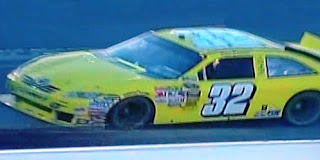 Reed Sorenson picked up the 5th last-place finish of his Cup Series career in Saturday’s Showtime Southern 500 at the Darlington Raceway when his unsponsored #32 Braun Racing Toyota fell out with crash damage after completing 19 of the race’s 367 laps.

Sorenson was making his fourth attempt of the 2010 season and his second straight without a sponsor. In qualifying, his first timed lap was 175.987 mph, but a spin off turn three during his second lap forced him to wait and see if he would make the show. In the end, five other cars outside the Top 35 ran slower than Sorenson, giving him the 36th starting spot. On Saturday, Sorenson dropped to the back of the field before the start, then went to the garage shortly after he slapped the outside wall during the opening green-flag run.

It was the first last-place finish of 2010 for both Sorenson and Braun Racing.

2010 last-place leader Joe Nemechek failed to qualify for Saturday’s race in a backup car after his primary, 18th fastest in the opening practice, was destroyed in a single-car wreck in Happy Hour. Both PRISM Motorsports cars of Dave Blaney and Michael McDowell rebounded from DNQs last week at Richmond and finished 42nd and 40th, respectively. McDowell’s car fell out when brake heat melted the bead on his right-front tire in turn two on lap 44, bringing out the first caution of the race.

STATISTICS AND FACTS
*Sorenson’s most recent last-place finish in Cup Series competition was the 2008 Aaron’s 499 at Talladega, where his #41 Target Dodge lost the engine four laps into the race.
*Sorenson was the first driver to finish last while driving NASCAR’s “Car of Tomorrow;” he crashed out 21 laps into the 2007 Food City 500 at Bristol.
*The finish was the second-ever for Braun Racing in the Cup Series. Shane Hmiel made his Cup debut for the team in the 2005 Kobalt Tools 500 at Atlanta, but his #08 Win Fuel Chevrolet was involved in a multi-car wreck on the first lap.
*The most recent last-place finish by the #32 in a Cup race was Bobby Hamilton, Jr’s Tide Chevrolet, when it lost an engine 63 laps into the 2005 Banquet 400 at Kansas.
*The #32 has never before finished last in a Cup race at Darlington, although the number of Roscoe Thompson’s 1949 Oldsmobile in the inaugural 1950 Southern 500 is unknown.

So if you named it CUP does this mean your going to post nationwide and truck series last place finishers?

Right you are, Chris. A formal announcement is coming up later this week at my YouTube channel. :)