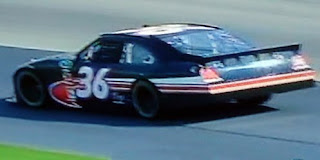 Johnny Sauter picked up the 1st last-place finish of his Sprint Cup career in Sunday’s Autism Speaks 400 presented by Hershey’s Milk and Milkshakes at the Dover International Speedway when his unsponsored #36 Tommy Baldwin Racing Chevrolet fell out with electrical problems after completing 29 of the race’s 400 laps.

Casey Mears was slated to make his third attempt as driver of the #36, but when Brian Vickers was hospitalized Thursday for blood clots in his legs and near his lungs, Mears was tabbed as Vicker’s substitute in the #83 Red Bull entry. This moved Sauter back into the #36 for the first time since Talladega, where a wreck left him 41st.

In qualifying, Sauter secured the 43rd and final starting spot with a speed of 152.795 mph - his time was just fifteen thousandths of a second faster than Todd Bodine’s #64 Gunselman Motorsports entry, which was sent home along with Max Papis’ #13. Since the team did not have adequate sponsorship, however, Sauter was forced behind the wall under green, followed seven laps later by both PRISM Motorsports cars and Mike Bliss in James Finch’s #09.

STATS AND FACTS
*Sauter’s finish in a Chevrolet ends a Toyota stranglehold on last place in the Cup Series: the last eight consecutive drivers to finish 43rd were all in Toyotas.
*Sauter was the first driver to finish last with electrical problems since Tony Raines last fall in the 2009 Checker O’Reilly Auto Parts 500 at Phoenix. No driver had ever finished last with electrical problems in a Cup race at Dover.
*For the second-straight year, a driver who didn’t have a single Cup last-place finish in nearly 100 starts ended up 43rd. Sauter’s finish came in his 79th start; David Gilliland’s finish in last year’s Autism Speaks 400 came in his 99th start. Sauter is the only first-time last-placer in the 2010 Cup season.
*It was the first last-place finish for Tommy Baldwin Racing since the 2009 Ford 400 at Homestead, when the #36 was driven by Michael McDowell.
*The #36 had never before finished last in a Cup race at Dover.