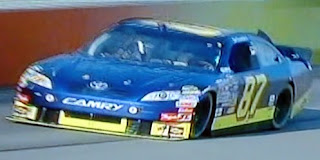 Joe Nemechek finished last in Saturday night’s Sprint Showdown at the Charlotte Motor Speedway when his unsponsored #87 NEMCO Motorsports Toyota fell out with electrical problems after completing 9 of the race’s 40 laps.

Nemechek was the final car to make his qualifying run in Friday’s qualifying for the Showdown before rain came and ultimately ended the session. Due to his late draw, this kept Nemechek at the back of the pack on Saturday in the 25th spot. During the opening green-flag run, Nemechek went behind the wall. Norm Benning went behind the wall just before Nemechek, but came back out and managed to finish on the lead lap in 20th.