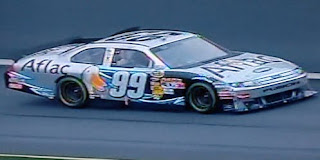 Carl Edwards finished last in Saturday night’s NASCAR Sprint All-Star Race XXVI at the Charlotte Motor Speedway when his #99 Aflac Ford was involved in a multi-car accident 90 laps into the 100-lap race.

Edwards’ up-and-down weekend began on qualifying day when, right after Showdown last-placer Joe Nemechek’s run, Edwards rolled out as one of the four final cars to make a timed lap. On his warm-up lap, Edwards suddenly slowed off turn four when he saw rain on his windshield. He drove backwards around the track and returned to pit road, but the qualifying session was soon cancelled, trapping Edwards back in the 26th spot in the Showdown due to his late qualifying draw.

Edwards finished 10th in the Showdown, but was then voted-in to the main event, securing him the 21st and final starting spot in the All-Star Race. His uneventful run that night ended with a bang when he was unable to avoid a multi-car crash in turn one at the start of the fourth and final ten-lap segment. Trapped between Jeff Gordon and Dale Earnhardt, Jr. in the outside groove, Edwards was unable to avoid slamming into the wrecked car of Mark Martin. All of the bottom five finishers were involved in the wreck.