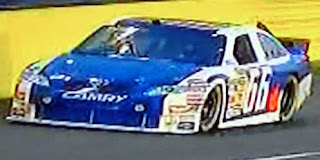 Dave Blaney picked up the 16th last-place finish of his Sprint Cup career in Sunday’s Coca-Cola 600 at the Charlotte Motor Speedway when his unsponsored #66 PRISM Motorsports Toyota fell out with transmission problems after completing 25 of the race’s 400 laps.

Blaney was the fastest “go-or-go-home” car in Thursday’s qualifying session, securing the 17th starting spot with a speed of 184.932 mph. It was his best qualifying run since he started 3rd at Bristol in March. After skipping Happy Hour, Blaney started Sunday’s 600-mile contest, but pulled behind the wall under green 25 laps into the race. Teammate Michael McDowell followed suit nine laps later while previous last-place leader Joe Nemechek went behind the wall on lap 46, 21 laps after Blaney.

The finish again moved Blaney and the #66 team into a tie with Joe Nemechek and his #87 for the current lead in both the 2010 Sprint Cup driver and team LASTCAR rankings. Blaney has also climbed into sole possession of 6th in the all-time LASTCAR rankings, five finishes away from Nemechek in 5th.