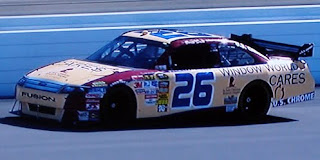 Boris Said finished last in the Second Gatorade Duel at Daytona when his #26 Window World Cares Ford pulled behind the wall with electrical problems after completing 3 of the qualifying race’s 60 laps.

Said, along with his former Carter-Simo Racing crew chief Frankie Stoddard, was turning his first competitive laps for Latitude 43 Motorsports, a new start-up team that was formed in the offseason. The team did not necessarily start from scratch, however, as it had acquired both equipment and a top 35 owner’s points position (22nd) from the Roush-Fenway team for which Jamie McMurray drove in 2009. thus guaranteeing the #26 a spot in the first five races of 2010. McMurray’s team was closed and sold to Latitude 43 so that Roush-Fenway could conform with NASCAR’s new four-car limit for multicar teams.

While the top 35 spot guaranteed Said a spot in each of the first five races of 2010, including the Daytona 500, the team was still short on funds as their Window World sponsorship is shared with Front Row Motorsports and driver John Andretti. While additional sponsorship came in from Sacred Power, a solar energy company, the team has only two cars and planned to run the same engine through all of SpeedWeeks.

Thus, in his Gatorade Duel, Said fell from his 23rd spot to the back of the field before the start of his Gatorade Duel, then lagged back from the draft before pulling behind the wall after 3 laps. The team listed electrical problems as the cause; no engine damage was reported. Said’s was the only car that failed to finish the race, but again, he will race in Sunday’s Daytona 500 due to his top 35 ranking.

The finish was Said’s second straight last-place finish in the Gatorade Duels. He crashed driving for Carter-Simo in last year’s race, knocking him out of the 500 field despite being one of the fastest cars in qualifying. Other than these two qualifying races, Said still has yet to have a single last-place finish in any of his 35 NASCAR Sprint Cup starts.

It was the first time the #26 had finished last in a Gatorade Duel since Steve Kinser lost the engine on his Quaker State Ford early in the First Gatorade Twin 125 in 1995. Like Said, Kinser’s car was the only one which didn’t finish the race. Both Said and Kinser are also among the only nine drivers who have ever finished last in more than one Gatorade Duel.