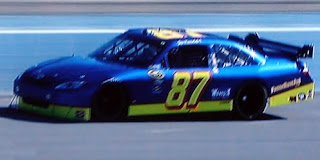 Joe Nemechek picked up the 18th last-place finish of his career in Sunday’s 52nd Annual Daytona 500 at the Daytona International Speedway when his #87 England's Stove Works / FrontRowJoe.com Toyota was involved in a single-car crash after completing 64 of the race’s 208 laps.

Nemechek was the 16th-fastest car in Saturday’s qualifying session, good enough to lock him into Sunday’s field based on his qualifying speed. In the First Gatorade Duel on Thursday, Nemechek played it safe with an 18th place finish and had teammate Jeff Fuller park his car after four laps, giving Fuller a last-place finish of his own. The run gave Nemechek the 41st starting spot on Sunday and, with last-minute sponsorship from England Stove, he planned to run the entire race.

Unfortunately, while running three laps down on lap 66, Nemechek lost control on its own in turn three and slid up the track, slamming the right-front of his Toyota into the outside wall. Nemechek walked away unhurt, but angry at Sam Hornish, Jr., whose lapped Dodge was following Nemechek at the time.

For much of the race, Regan Smith looked like he was going to secure his first-ever last-place finish after his own car was involved in a multi-car wreck on lap 9. However, Smith returned to the track late in the event and completed 90 laps, more than enough to drop Nemechek to 43rd.

The race marks the first time the #87 finished last at Daytona since Kenny Wallace, then Nemechek’s teammate at Furniture Row Racing, fell out with engine problems 141 laps into the 2008 Daytona 500. Nemechek also finished last in the 1995 Daytona 500 while driving another of his NEMCO Motorsports cars, then a Burger King-sponsored Chevrolet.

For next week at the Auto Club Speedway of Southern California, Nemechek is the defending last-place finisher of the Auto Club 500.