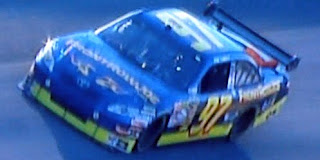 Jeff Fuller finished last in Thursday's First Gatorade Duel at Daytona when his unsponsored #97 NEMCO Motorsports Toyota pulled behind the wall with engine problems after completing 4 of the qualifying race’s 60 laps.

Fuller, who started 22nd in the race, was attempting to make his first Sprint Cup start since the 2005 MBNA RacePoints 400 at Dover, which interestingly was the scene of his fourth and most recent last-place finish. The car Fuller drove was a team car to the #87 of owner Joe Nemechek, who locked himself into the Daytona 500 field in Saturday’s qualifying session. While Nemechek completed the entire qualifying race with an 18th place finish, Fuller pulled to the apron and off the track just four laps in. As a result, Fuller was one of the 11 cars who failed to qualify for the Daytona 500.

In the second Duel, defending LASTCAR champion Dave Blaney also failed to make the field, though Michael McDowell, his new teammate at PRISM Motorsports, made the show in the first Duel.

The race marked the first time that both Fuller and the car number 97 had ever finished last in a Daytona qualifying race.