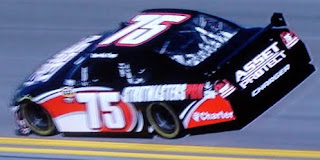 Derrike Cope finished last in Saturday’s Budweiser Shootout at Daytona when his #75 Asset Protect / Strutmasterspro.com Dodge fell out with an engine failure after completing 15 of the race’s 76 laps.

Cope, second in the all-time LASTCAR standings with 26 last-place finishes in the NASCAR Sprint Cup Series, was making his first appearance in the Budweiser Shootout since 1999. That year, he gained entrance after winning his first career pole position in the 1998 UAW-GM Quality 500 at Charlotte. This year, the race included past Daytona points race winners, giving Cope a spot due to his upset victory in the 1990 Daytona 500.

On Thursday, Cope drew the 18th starting position for the 24-car field, but he was forced to start in the back for failing to participate in either of the two practice sessions run that day. In the first 25-lap segment, Cope lost the lead draft and was trying to catch the trailing cars of Juan Pablo Montoya and Bobby Labonte when he pulled behind the wall with engine problems.

This coming Thursday, Cope will start 25th in the Race 2 of the Gatorade Duels and will have to race his way in to the field for the Daytona 500. If he qualifies, it will be Cope’s first Daytona 500 start in six years.