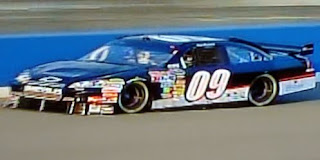 Aric Almirola picked up the 3rd last-place finish of his career in Sunday’s Shelby American at the Las Vegas Motor Speedway after his unsponsored #09 Phoenix Racing Chevrolet fell out with vibration problems after completing 23 of the race’s 267 laps.

Almirola’s second-consecutive last-place finish came on the heels of yet another thrilling performance in qualifying. On his first timed lap, Almirola pulled off a speed of 183.038 mph, but with a handful of “go-or-go-homers” still to qualify, he decided to run a second lap. It was then that Almirola lost control in turns one and two and slapped the wall, forcing him to abort the lap. Fortunately, neither Casey Mears nor Terry Cook beat Almirola’s time and the Florida driver secured the 43rd and final starting spot.

Unfortunately, the damage forced Almirola to skip the second practice on Saturday and run just 41st-fastest in Happy Hour. On Sunday, he was unable to run more than 23 laps before falling out under green with a vibration. Almirola is the first driver to finish last because of a vibration since Patrick Carpentier in Tommy Baldwin’s then-unsponsored #36 Toyota fell out of last year’s Pocono 500 at Pocono.

The race marked the first time Almirola, owner James Finch, and the #09 had ever finished last at Las Vegas, the scene of Almirola’s NASCAR Sprint Cup debut in 2007.

In addition, I would like to personally congratulate PRISM Motorsports and 2009 LASTCAR Champion Dave Blaney on their herculean efforts at Las Vegas. After Blaney’s outstanding 5th-place qualifying run at Fontana, NASCAR selected his #66 for random post-race inspection. The move forced Blaney to qualify the team’s only backup car at Las Vegas, which fortunately was able to run with some approved parts from the Fontana car. Not only did Blaney make the show with a 36th-fastest qualifying lap, but despite a lack of sponsorship, he still completed the entire race, finishing 3 laps down in 29th.

It is my sincerest hope that this is a sign of better things to come.