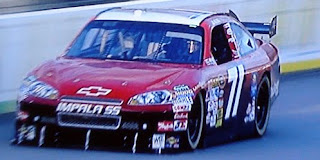 Bobby Labonte picked up the 10th last-place finish of his career in Sunday’s Price Chopper 400 at the Kansas Speedway when his #71 Mahindra Tractors / Adobe Road Winery Chevrolet was involved in a multi-car crash on lap 7 of the 267-lap race.

On Friday, Labonte qualified 26th for the race at a speed of 173.349 mph. Although the #71 team lacked sponsorship coming into the race, they gained sufficient sponsorship from Mahindra Tractors and Adobe Road Winery to run the entire race. The #71 gained similar last-minute sponsorship two weeks ago at New Hampshire where Labonte qualified 8th. On Sunday, Labonte was racing mid-pack when he was taken out in a multi-car wreck that brought out the second caution of the race on lap 7.

The wreck began when Paul Menard’s Ford lost control coming off turn two, causing him to slide up directly in front of David Ragan and Bobby Labonte, who were running nose-to-tail in the outside groove. Both had nowhere to go. As Ragan hit Menard, Labonte banged into the back of Ragan’s Ford, then was clipped by Michael Waltrip, who was forced up into the wreck by Reed Sorenson.

Labonte and Waltrip suffered the most damage in the incident and, for several laps, it appeared that Waltrip would finish last for the first time since last summer's Sunoco Red Cross Pennsylvania 500 at Pocono. However, when Waltrip returned to the race 80 laps down, Labonte did not, and Labonte finished last. Labonte completed just 6 laps. Last-place leader Dave Blaney finished 40th. Tony Raines was denied a chance at three straight last-place finishes when Kevin Hamlin stepped into car #37 to make his first Sprint Cup attempt. Hamlin failed to qualify on Friday, but will again be in car #37 in next week’s Pepsi 500 at the Auto Club Speedway of Southern California.

The finish was Bobby Labonte’s second of 2009, and his first since his #96 DLP Ford fell out with engine problems at August’s Carfax 400 at Michigan. Labonte now sits 10th on the all-time last-place rankings. It is also the third last-place finish for owner Kevin Buckler for The Racer’s Group, the first for the #71 team since David Gilliland’s CompUSA Chevrolet fell out with power steering problems in the Autism Speaks 400 at Dover back in May. It is also the first time the #71 has ever finished last in a Sprint Cup race at the Kansas Speedway.