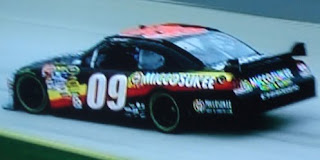 Mike Bliss picked up the 5th last-place finish of his career in Sunday’s Pepsi 500 at the Auto Club speedway of Southern California when his #09 Miccosukee Dodge fell out with engine problems after completing 11 of the race’s 250 laps.

Bliss qualified 23rd for the race at a speed of 180.845 mph, but deliberately fell to the back of the field before the start of the race. As the race began, it appeared last place would go to David Gilliland, back in the #71 that finished last at Kansas last week. Gilliland had arranged to park his car on lap 6 and relieve Kyle Busch, who was suffering from the flu. However, as the race stayed under green, Gilliland stayed out until lap 14. By then, Mike Bliss had been behind the wall for three laps, giving him the 43rd finishing position. Gilliland drove Busch's Toyota to a 24th place finish.

It was the third last-place finish for both Bliss and owner James Finch in 2009 and their first since the rain-shortened Coca-Cola 600 in May. The #09 has one other last-place finish at the Auto Club Speedway: Joe Ruttman finished 43rd in the 2004 Auto Club 500 while also driving Finch’s Miccosukee Dodge.

Tony Raines, second in this season’s last-place rankings, failed to qualify for Sunday’s race. Raines did not lose any ground to last-place leader Dave Blaney, however, as Blaney’s #66 finished 41st after completing 22 laps.