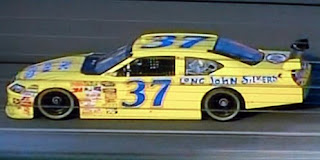 Tony Raines picked up the 7th last-place finish of his career in Sunday’s AAA 400 at the Dover International Speedway when his #37 Long John Silver’s Dodge fell out with overheating problems after completing 13 of the race’s 400 laps.

On Friday, Raines qualified 42nd at a speed of 151.547 mph, but was again forced to change engines and start 43rd as a result. During the opening green-flag laps, Raines pulled behind the wall on lap 13, 12 laps before NASCAR threw a competition caution on lap 25. Joey Logano, the Daytona 500 last-place finisher, was then involved in a vicious wreck on the lap 31 restart and finished 42nd. Last-place leader Dave Blaney failed to crack the bottom five; his transmission problem did not take him out of the race until he completed 74 laps, and he finished 37th.