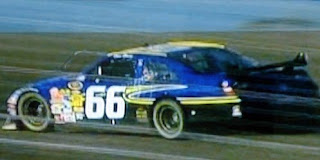 Dave Blaney picked up the 13th last-place finish of his career in Saturday night’s Chevy Rock ‘n Roll 400 at the Richmond International Raceway when his unsponsored #66 Prism Motorsports Toyota fell out with brake problems after completing 36 of the race’s 400 laps.

On Friday, Blaney qualified 32nd with a speed of 124.372 mph. During Saturday’s race, Blaney was running in a tight pack of traffic, and while he stayed on the track when Scott Speed’s wreck brought out the first caution on lap 5, he dropped out under the ensuing green-flag run with brake problems after completing 36 laps.

Unlike Blaney, Prism Motorsports is not the first team to finish last in three consecutive races: that statistic goes to Geoffrey Bodine’s owner-driver operation, which pulled that feat in May of 1997. Back then, two straight engine failures forced Geoffrey’s #7 QVC Ford to finish last at the Infineon Raceway and at Talladega Superspeedway. When Geoffrey was injured before the next points race, the Coca-Cola 600 at Charlotte, brother Todd Bodine was tabbed as the relief driver. Todd then finished last in the 600 after an early crash.

The #7 team’s streak ended the following week in the Miller 500 at Dover, but just barely. With all cars still on the track on lap 240, Geoffrey Bodine got in a wreck in turn three with Bobby Hillin and Dick Trickle. While all three cars retired from the race, Trickle finished 41st with 238 laps completed, Bodine got 42nd with 237, and Hillin, the last-place finisher, completed 234.