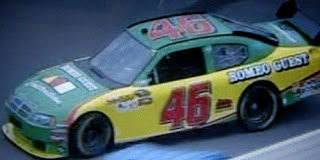 Carl Long finished last in Saturday’s Sprint Showdown at the Lowe’s Motor Speedway when the engine failed on his #46 Romeo Guest Construction Dodge lost the engine after completing 3 of the race’s 40 laps.

In Friday’s practice, Long’s engine blew during a mock qualifying run, forcing him to switch engines before qualifying that afternoon. A mid-afternoon thunderstorm forced the cancellation of Sprint Showdown qualifying, but this ironically worked to Long’s benefit. Since the Showdown was not a points event, the starting lineup was determined by the random draw that set the qualifying order. Long was set to be the 2nd driver to qualify, so his #46 was awarded the outside-pole for the Sprint Showdown. However, Long’s engine change forced him to surrender the spot and start at the back of the largest Sprint Showdown field since 1996. A similar fate befell the polesitter, fellow owner-driver Kirk Shelmerdine, who was forced to the back after damaging his primary car in practice.

Long held his own in the early laps, but when the first caution fell on lap 2, his #46 was on the apron with smoke coming from the left-front fender. Though this appeared to be the result of making contact with another car in traffic, Long pulled behind the wall under yellow with a blown engine.

Ironically, despite the two failed engines, Long was then penalized 200 driver and owner points and was put on a 12-race suspension the following Wednesday when NASCAR ruled his race engine was too big.

The finish marked the first time both Long and the #46 have ever finished last in the Sprint Showdown. Long has three last-place finishes in NASCAR Sprint Cup points races, most recently in the 2005 New England 300 at New Hampshire. It is also the second time the outside-polesitter of the Sprint Showdown has ever finished last: Todd Bodine did the same when an early crash took him out of the 2003 Winston Open.

Also of note, Dave Blaney, the current 2009 leader in last-place finishes, secured sponsorship for the Sprint Showdown, inherited the outside-pole from Long, and contended for the lead for much of the race before finishing 11th.

This time he had shown the performance which no one had been expecting. In the end everyone has been blaming the crew for the bad performance for taking better care of car.

In that car race I wonder what happened to his car and now I am able to know about the situation. I think that it was meant to be like this for him in the car race which he lose.