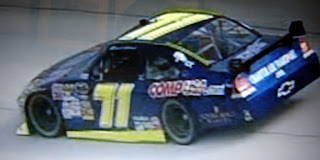 David Gilliland picked up the 2nd last-place finish of his career in Sunday’s Autism Speaks 400 presented by Heluva Good! at the Dover International Speedway when his #71 CompUSA Chevrolet fell out with an engine failure after completing 38 of the race’s 400 laps.

Gilliland was the second-fastest go-or-go-homer in Friday’s qualifying session, good enough for 24th with a speed of 154.593 mph. On race day, Gilliland stayed out an extra lap during the first yellow flag, a competition caution on lap 30, allowing him to lead lap 33. Gilliland would eventually pit, then go behind the wall not long after the restart on lap 38. Gilliland became the first driver to finish last in a NASCAR Sprint Cup Series race due to a power steering failure.

The finish was the second last-place finish for both driver, team, and number in three NASCAR Sprint Cup points races, the previous being Gilliland’s early exit from the Southern 500 at Darlington three weeks ago. Gilliland also became the first last-place finisher to lead a lap since A.J. Allmendinger’s single start for Michael Waltrip Racing in last fall’s Bank of America 500 at Lowe’s. Gilliland is now tied with Mike Bliss for second in the 2009 last-place rankings, both drivers one finish behind leader Dave Blaney. Blaney and Bliss also fell out early at Dover and finished 39th and 40th, respectively.