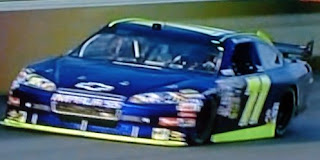 David Gilliland picked up the 1st last-place finish of his career in Saturday’s Southern 500 at the Darlington Raceway when his unsponsored #71 TRG Motorsports Chevrolet lost the fuel pump after completing 27 of the race’s 367 laps. The finish came in Gilliland’s 97th career Sprint Cup start.

Gilliland and Kevin Buckler’s TRG (The Racer’s Group) Motorsports team were one of the many pleasant surprises at the opening of the 2009 season. TRG made its first NASCAR Sprint Cup attempt with Mike Wallace in the Daytona 500, but barely missed the show. David Gilliland took over driving duties at Fontana, and since then, the #71 has made every race and has been either in or near the top 35 in owner’s points. However, the team’s first two DNF’s came in consecutive races at Talladega and Richmond, and Gilliland and TRG looked for redemption at Darlington.

Gilliland was 3rd fastest in Friday’s first practice session for the Southern 500 and he was again the fastest of the go-or-go-homers in Happy Hour. The car struggled in qualifying, picking up the 30th starting spot with a speed of 175.441, but the #71 was still the third-fastest go-or-go-homer behind Max Papis and Regan Smith. In the race, Gilliland kept his nose clean through a pair of early cautions, but he pulled behind the wall under green with a busted fuel pump on lap 28. Gilliland did not return to the race.

It is the first last-place finish for Kevin Buckler and TRG and the first for the #71 since Jay Sauter, driving Dave Marcis’ RealTree Chevrolet, fell out after an early crash in the 2002 EA Sports 500 at Talladega.