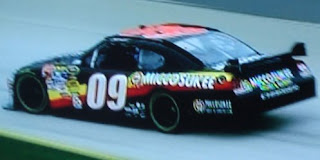 Mike Bliss picked up the 4th last-place finish of his career in Monday’s rain-delayed and rain-shortened Coca-Cola 600 at the Lowe’s Motor Speedway when his #09 Miccosukee Indian Gaming and Resorts Dodge fell out with a vibration after completing 42 of the race’s 227 laps.

Bliss’ tumultuous weekend in Charlotte began on Thursday with a surprising 7th-fastest qualifying run for the 600 at a speed of 187.422 mph. The run was his second top-10 start in as many Cup races; he started 6th at Richmond three weeks earlier. In Saturday night’s Nationwide Series race, Bliss was the benefactor of a wild finish. A late-race caution during green-flag stops trapped leaders Kyle Busch and Brian Vickers a lap down, moving Bliss and Brendan Gaughan into the lead. Bliss took the lead from Gaughan just before the rains came, ultimately ending the race with 30 laps to go and giving Bliss his first Nationwide Series victory in five years.

Despite the victory and a determination to run the entire 600-miler the next day, Bliss fell back on Monday and went behind the wall under the third caution on lap 40, a scheduled competition caution, with a bad vibration. Bliss did not return to the race and was credited with completing 42 laps.