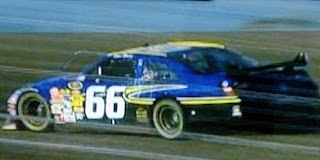 Dave Blaney picked up the 8th last-place finish of his career in Saturday’s Crown Royal presents the Russ Friedman 400 at the Richmond International Raceway when his unsponsored #66 Prism Motorsports Toyota was involved in a single-car crash on lap 9 of the 400-lap race.

After missing the previous week’s race at Talladega due to a social obligation, Blaney returned to the Prism Motorsports team at Richmond. Blaney qualified a solid 26th in the 43-car field with a speed of 124.908 mph. Due to rainy weather in the Richmond area, the opening six laps of Saturday’s race were run under the caution flag. On lap 7, the field took the green flag and Blaney worked the high side to get through the field. Unfortunately, he entered turn three too high on lap 9 and spun out, backing his Toyota into the outside wall. Though Blaney was able to slow down enough so that the impact did little damage to the rear of his car, Blaney went behind the wall and did not return to the track.

The race was Blaney’s third last-place finish of the year and his first since last month’s Samsung 500 at Texas. No one else has had more than one this season. This was the first time the Phil Parsons-owned team has left the race with any damage to the car’s sheetmetal. The team’s previous two last-place finishes were because of steering and brake failures, respectively.