Biffle Body-Slammed Out Of All-Star Race at Lowe’s 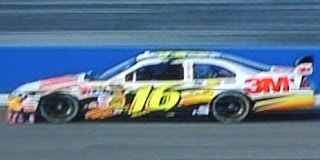 Greg Biffle finished last in Saturday’s NASCAR Sprint All-Star Race at the Lowe’s Motor Speedway when his #16 3M Ford was involved in a two-car crash on lap 71 of the 100-lap race.

Biffle scored the 11th starting spot in Friday’s qualifying session, having incurred a five-second penalty for a lugnut that was left loose during his pit stop. Biffle ran a quiet race through the first two 50 and 20-lap segments, but found trouble at the start of the third 20-lap segment. Just one lap into the segment, while running the high groove in turns one and two, Biffle had nowhere to go when Sam Hornish, Jr.’s Dodge broke loose under him, pinning Biffle into the outside wall. The car’s passenger-side sheetmetal was knocked flat as a result, and the right-front corner of his Ford was damaged the most severely. Biffle went behind the wall and did not return to the track.

The race is Biffle’s first last-place finish in the All-Star Race. He has four last-place finishes in NASCAR Sprint Cup points races, most recently in last summer’s Coke Zero 400 at Daytona.