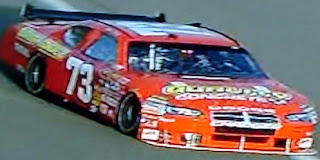 Tony Raines picked up the 4th last-place finish of his career in Saturday's Subway Fresh Fit 500 at Phoenix International Raceway when his Quality Concrete Dodge suffered a brake failure after completing 56 of the race’s 312 laps.

The #73 team, owned by Barry Haefele, came together late in the 2009 offseason and, with stock car veteran Mike Garvey behind the wheel, attempted the first three NASCAR Sprint Cup races at Daytona, Fontana, and Las Vegas. When Garvey failed to qualify for these races, the team took some time off and returned at Phoenix with Tony Raines taking over as driver. Raines performed admirably in qualifying, beating five go-or-go-homers with a speed of 131.406 mph. The speed gave the Haefele team its first Sprint Cup start, and they would roll off in the 43rd and final starting spot. In the race, both car and team worked to get up to speed and Raines was lapped midway through the first green-flag run. During the first caution for Sterling Marlin’s crash, Raines pulled behind the wall with brake problems. Marlin returned to the track, but Raines did not, and he finished last as a result.

Coming into the Phoenix race, the #73 had not finished last since Steve Moore’s Franklin City Music Park Pontiac lost oil pressure just three laps into the 1982 Atlanta Journal 500 at Atlanta. On the plus side, however, Raines completed the second-most laps of any last-place finisher this season, trailing only Joey Logano’s 79 laps in this year’s season-opening Daytona 500.