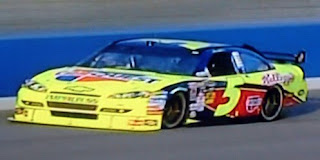 Mark Martin picked up the 8th last-place finish of his career in Sunday’s Aaron’s 499 at the Talladega Superspeedway when his Kellogg’s / Carquest Chevrolet was involved in a massive crash on lap 7 of the 188-lap race.

Martin was riding high after scoring a tremendously-popular win the week before at Phoenix, snapping a 97-race winless drought in the process. At Talladega, he qualified 7th with a speed of 187.860 and was running around that position as the field moved into turn three on lap 7. It was there that Matt Kenseth and Jeff Gordon made contact in the higher groove, setting off a massive ten-car pileup. Gordon’s car wobbled down from the outside wall and into Jamie McMurray, who was on the outside of Kevin Harvick and Scott Riggs. The four cars fused together just as Mark Martin tried to squeeze by on the inside. The nose of Riggs’ Toyota clipped the right-rear of Martin’s Chevy, sending Martin straight into the outside wall with more than enough force to lift his rear tires off the ground. Fortunately, Martin and the other drivers involved walked away. A.J. Allmendinger and Kasey Kahne traded the 43rd spot after the race resumed, but both returned to the track. Martin did not, however, and his Chevrolet finished last.

The race was Martin’s first last-place finish at Talladega and his first in a points race since another early crash in the 2007 Pep Boys Auto 500 at Atlanta. Martin is now the highest-qualified driver to finish last in a NASCAR Sprint Cup points race this season and the third to start in the top 10. Rick Hendrick’s #5 team had not finished last since then-rookie Kyle Busch finished last in the 2005 GFS Marketplace 400 at Michigan with overheating problems. Busch led 28 laps that day.

The race also featured one of the most incredible upsets in NASCAR Sprint Cup history when Nationwide Series regular Brad Keselowski took Phoenix Racing to victory lane for the first time. The team, owned by James Finch, had finished no better than 40th in its previous four starts this season, including a last-place at Atlanta in March, and had failed to qualify for the other four events. However, the team has never been far from the fight at the restrictor-plate tracks and has two top-fives in the Daytona 500 with Geoffrey Bodine (2002) and Mike Wallace (2007). Keselowski has 5 Sprint Cup starts and, to date, no last-place finishes.