Blaney Leads 2009 Rankings After Brakes Burn Out At Texas 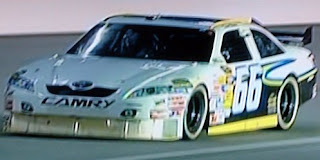 Dave Blaney picked up the 7th last-place of his career in Sunday's Samsung 500 at the Texas Motor Speedway when his unsponsored #66 Prism Motorsports Toyota suffered a brake failure after completing 48 of the race’s 334 laps.

On Friday, Blaney squeezed himself into the Texas field with a speed of 186.111 mph. Blaney’s lap time was just enough for Blaney to beat five “go-or-go-homers” with Joe Nemechek, the fastest of them, missing Blaney’s time by just 12 thousandths of a second. Blaney started 43rd on Sunday, but the long green-flag run at the beginning of the race taxed his car’s equipment. The #66 made at least three green-flag stops in the first 45 laps and, after completing just 48 laps, fell out of the race with a brake problem.

For both Blaney and team, it was their second last-place finish in three races. Blaney is now the only driver with more than one last-place finish in a 2009 NASCAR Sprint Cup Series points-paying race. It is the first time a last-place finisher fell out with a brake failure since owner-driver Morgan Shepherd's #89 Victory In Jesus Dodge finished 43rd in the 2006 Chevy Rock ‘n Roll 400 at Richmond.