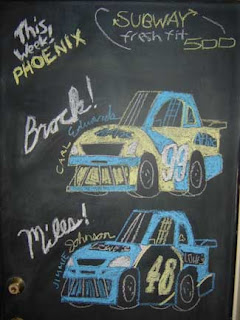 THE WINNER:
#48-Jimmie Johnson finally scored the first win of 2008 for Hendrick Motorsports, doing so in dramatic fashion by stretching his fuel for the final 82 laps, driving slower and slower around the one-mile facility as several contenders dove onto pit road. The win is Johnson’s second consecutive Phoenix victory and his first at night. Johnson led a race-high 120 laps en route to the checkered flag. 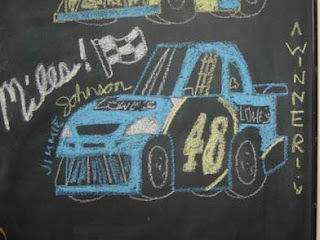 #07-Clint Bowyer After problems with overusing his brakes to the point that they started to vibrate, he stretched his fuel and wound up several seconds behind #48-Johnson.
3)

#99-Carl Edwards Strong run early on was compromised when his pit crew jumped the wall too early just before #78-Nemechek brought out the caution on lap 114, putting him one lap down AND at the tail end of the line. Got the Lucky Dog under #19-Sadler caution and fought back, narrowly avoiding another pit penalty. Pitted with 6 to go for a splash-and-go which, despite his crew’s concerns, was enough to go the distance.
5)

#8-Mark Martin Defended his strong qualifying run early on and found himself in the lead around halfway, fighting a furious battle with #88-Earnhardt, Jr. for the lead for much of the rest of the race. Ran over what appeared to be a brake rotor off the damaged #9-Kahne car on lap 245, but did not appear to suffer any damage. Concerns about fuel mileage made him pit with 11 to go, allowing #48-Johnson to make the winning pass. Led 68 laps.
6)

#31-Jeff Burton The biggest mover through the field through the first 100 laps was the first to spin during the #12-Newman caution on lap 133, but recovered nicely thanks in no small part to having the same fuel mileage as Childress teammate #07-Bowyer. Still leads the points.
7)

#88-Dale Earnhardt, Jr. Led his first laps at Phoenix since his 2004 win at the track despite frequent complaints about the car’s handling and it appeared he would have to beat #8-Martin in his old ride when he was forced to pit for fuel with 11 to go just before #8-Martin. Led 87 laps.
8)

#1-Martin Truex, Jr. Concerned about his carburetor all weekend, but was another constant figure in the top 10 who was forced to pit for fuel with 15 to go.
9)

#18-Kyle Busch Complaints of “zero grip” and a fluttering fuel gauge proved distracting as he drove on to another solid run. Won Friday’s Nationwide race.
11)

#5-Casey Mears Cut through the grass during the chaotic #12-Newman caution on lap 133 and was able to stretch his fuel.
12)

#43-Bobby Labonte Stretched his fuel as well on the final run in a car which, despite dropping a cylinder around halfway, was able to remain on the lead lap.
13)

#24-Jeff Gordon Lost a lap with #99-Edwards and others during the lap 114 caution brought out by #78-Nemechek and got the Lucky Dog under the #41-Sorenson caution on lap 147, but handling problems kept him from contention. Pitted for fuel with 9 laps to go.
14)

#20-Tony Stewart Noticeably absent among the frontrunners, particularly when it got dark. Pitted for fuel with 13 laps to go and stalled it briefly, though not as badly as #29-Harvick did 6 laps later.
15)

#42-Juan Pablo Montoya Was spun through the backstretch grass off #7-R. Gordon on lap 147, just around the same time as the #41-Sorenson caution.
17)

#26-Jamie McMurray Minor right-side damage to his car from an undisclosed incident. Nearly plowed the wall in turn one when he caught some fluid on the track on lap 114, #78-Nemechek getting lost in his smoke and slapping the wall to bring out caution. Used pit strategy to remain near the top 15.
18)

#44-David Reutimann Fought his way back into the top 35 in owner’s points despite significant tire mark damage on the fender behind his right-front tire.
19)

#29-Kevin Harvick Was as high as second in the late stages after finding his way into the top five when night fell, but lacked both the luck and the fuel mileage of his Childress teammates. He pitted with 7 to go and stalled, costing him 10 additional seconds in the pits.
20)

#77-Sam Hornish, Jr. (R) The top-finishing rookie of the race for the series-leading fourth time in 2008 had a little trouble getting up to speed when the race finally restarted following the #12-Newman caution, but otherwise stayed out of trouble.
21)

#2-Kurt Busch Penalized early for a crewman letting a tire roll away, then gambled on old tires to get track position back which ultimately slipped away in the late going as his car wouldn’t stop pushing.
24)

#83-Brian Vickers Fought hard with #99-Edwards for the Lucky Dog when #19-Sadler slowed up with 151 to go, but missed it narrowly when the caution fell.
26)

#66-Scott Riggs Great qualifying run, but was unfortunately unable to get his lap back once he lost it.
27)

#6-David Ragan Was continuing his string of strong runs by getting into the top 10 on lap 75, but a blown right-front tire and very minor bumper damage from the resulting spin on the backstretch in the sixth caution proved unusually costly.
28)

#7-Robby Gordon Just like last week at Texas, remained with the leaders trying to get his lap back for several laps in the mid-to-late stages. Spun #42-Montoya through the grass during a shoving match on lap 147 while #41-Sorenson hit the wall in an unrelated incident.

#22-Dave Blaney Won the “Good Hands Driver” award for narrowly missing #19-Sadler when he suddenly slowed on the frontstretch, but had suffered minor fender damage from contact with #17-Kenseth and #41-Sorenson under the lap 133 caution brought out by #12-Newman.
31)

#10-Patrick Carpentier (R) Nudged out of the groove by an aggressive #88-Earnhardt, Jr. trying to climb back
through the field.
34)

#9-Kasey Kahne Good run early in the going ruined when he slammed the outside wall off turn four with 83 to go, then hit the turn one wall even harder, bringing out the seventh and final caution.
37)

#70-Johnny Sauter Return to HAAS-CNC racing marred when he suffered significant damage to the front of his car trying to avoid the cars spinning in the oil dropped by #12-Newman on lap 133.
38)

#17-Matt Kenseth His 300th Cup start left much to be desired, falling to 43rd early right before he blew a right-front tire on lap 41 and hit the outside wall off turn four. He returned to the track several laps down only to spin and wreck again in the #12-Newman caution on lap 133. Still finished running.
39)

#96-J.J. Yeley Dropped to the back due to an engine change and was second only to #31-Burton in positions gained through the first 100 laps, but the hometown hero suffered severe damage to the front of his car in the #12-Newman caution on lap 133 and has now fallen out of the top 35.
40)

#78-Joe Nemechek The first car to go a lap down, he brought out the second caution (first was for debris) when he slammed the outside wall in turn one on lap 114 when he got lost in the brake smoke left by #26-McMurray when he, too, tried to slow up in some fluid dropped on the track.
41)

#19-Elliott Sadler His excellent outside-pole qualifying run and inspiring rally back into the top 5 at halfway was all for naught when his engine suddenly failed coming off turn four with 151 to go, #22-Blaney barely avoiding contact in what was the fifth caution of the race.
42)

#41-Reed Sorenson After sustaining damage in the #12-Newman caution on lap 133 when he spun with the damaged #17-Kenseth, he was penalized for removing equipment from th pit box and then hit the wall in turn three on lap 147 when his left-front tire failed, bringing out the fourth caution.
43)

#12-Ryan Newman The polesitter looked stout in the early going, holding off battles from #99-Edwards and the rest of the field, but on lap 133, his engine lost a seal and sprayed oil all over the track, causing the third caution on the backstretch with a wreck which involved #31-Burton, #41-Sorenson, #17-Kenseth, #96-Yeley, and #70-Sauter. After leaking the fluid all over the track and spinning in his pit box, the race was red-flagged to clean up the mess. Led 37 laps.