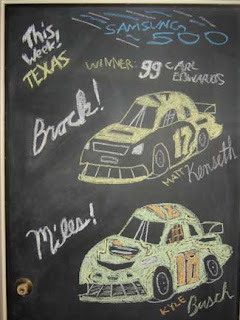 THE WINNER:
#99-Carl Edwards scored a convincing victory in the Samsung 500 at Texas, leading a race-high 123 laps and surviving a green-white-checkered finish to win his third race of the season. So far, only third-place finisher #18-Kyle Busch has been able to beat Edwards on an intermediate track in 2008.

#18-Kyle Busch Fast laps early worried his crew about their driver showing their hand too early, and they were right as the rest of the field caught up. Led 50 laps.
4)

#12-Ryan Newman Found his way into the top five late, but was unfortunately too high in inspection.
5)

#31-Jeff Burton It took him all 339 laps to get up this far after a slow qualifying lap, but perhaps would have taken the checkers if he had a few more.
7)

#20-Tony Stewart Though concerned that his engine was blowing up late, he still finished under power.
8)

#8-Mark Martin Four tires was the right call for him on the last pit stop before the green-white-checkered finish.
9)

#07-Clint Bowyer Hooked into the wall by #11-Hamlin coming to the checkers, costing him about 4 spots.
11)

#26-Jamie McMurray Almost led a lap during green-flag pit stops, but pitted before he could.
15)

#38-David Gilliland Brushed the wall late in the event, but still had a solid run after losing his sponsor.
16)

#42-Juan Pablo Montoya After incident with #17-Kenseth, was bumped out of the way late in the race by leading #99-Edwards.
20)

#19-Elliott Sadler Had a sudden electrical problem under green and slowed in the quad-oval, but kept going.
27)

#84-Mike Skinner Mired in the back after an engine change dropped him from a 9th-place starting spot.
30)

#7-Robby Gordon Rode the outside wall every lap, brushing it often and bringing out the third caution for his most vigorous brush with the fence.
31)

#55-Michael Waltrip Spun off turn four on lap 28 to bring out the first caution of the race, but his only damage was a broken splitter bracket.
32)

#77-Sam Hornish, Jr. (R) Bounced off the wall after a heated battle with #44-Reutimann on the backstretch.
33)

#00-Michael McDowell (R) Even after his horrifying qualifying wreck, he still drove the whole race, though noncompetitively.
34)

#1-Martin Truex, Jr. Was in the top ten, but had smoke in the cockpit for several laps before the engine expired with 7 laps to go, bringing out the sixth caution (the fifth for debris a few laps earlier), and setting up a green-white-checkered finish.
37)

#70-Jeremy Mayfield Turned out to be his last run in this car; Johnny Sauter will return to the team at Phoenix.
39)

#16-Greg Biffle Lost several laps when a vibration turned out to be engine trouble.
40)

#34-John Andretti Pitted early for a loose tire under green, later dropped out with suspension failure.
41)

#44-David Reutimann Fracas with #77-Hornish, Jr. foreshadowed on an overheating problem with his 2nd engine of the weekend.
42)

#96-J.J. Yeley Hit the inside backstretch wall hard on lap 177 to bring out the fourth caution of the race.
43)

#24-Jeff Gordon Horrible handling and a spin which brought out the second caution put him in testing mode, which also didn’t go well.