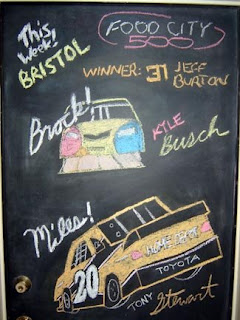 THE WINNER:
In a race dominated by the Joe Gibbs Toyotas of #11-Denny Hamlin, #20-Tony Stewart, and #18-Kyle Busch, it was Richard Childress Racing who had the last laugh, running in the top 5 all day before finishing 1-2-3 for the first time with #31-Jeff Burton coming out as the surprise winner. #31-Jeff Burton led only the final 2 laps to score the upset victory.

#29-Kevin Harvick Took the lead with 154 to go and, like his other Childress teammates, was in the top 5 for much of the day. He raced #20-Stewart hard for the second position in the final 10 lap shootout and slid up the track in turn two, spinning #20-Stewart and allowing #31-Burton to slip by them both into second, setting up #31-Burton’s winning pass on #11-Hamlin on the restart. Led 32 laps.
3)

#07-Clint Bowyer Was very fast early on the heels of his rain-shortened Nationwide win at the track, taking the lead from rained-out polesitter #48-Johnson and lapping cars. Led 81 laps.
4)

#16-Greg Biffle Ran a very quiet, very clean fourth-place finish at what is becoming one of his best tracks.
5)

#88-Dale Earnhardt, Jr. Poor handling was a big problem for much of the race, so he spent much of the early going diamonding the corners to get some more speed.
6)

#11-Denny Hamlin Took the lead as the early cloud cover parted around the halfway mark. When the sixth caution of the race came out for #40-Franchitti’s second spin, he checked up and pinched #5-Mears hard into the outside wall. He also lost the right-rear quarter-panel from earlier contact with #42-Montoya. Stayed out with #20-Stewart and #88-Earnhardt, Jr. after the #83-Vickers caution with about 10 to go and got around #20-Stewart for the lead somehow on the restart. When the tenth and final caution came out for #20-Stewart’s spin, his car had a fuel pickup problem on the restart and was quickly passed by #31-Burton and his Childress teammates for the win. Led 98 laps.
7)

#9-Kasey Kahne Bounced back from a too fast exiting pit road penalty.
8)

#8-Aric Almirola He and #38-Gilliland were two of the biggest surprises when the checkered flag fell, both of their cars finishing in the top 10 with hardly a scratch on them, having not been involved in any of the race’s incidents.
9)

#38-David Gilliland His finish, despite his struggles with the COT in 2007, was just as surprising as #8-Almirola’s was for his limited experience in Cup racing.
10)

#24-Jeff Gordon Was not a factor all day due to a major push condition the crew was unable to fix.
12)

#20-Tony Stewart Led much of the middle-to-late stages of the race as he led he most laps in the Food City 500 for the third consecutive year. However, like the other two times, he did not win the race, for in choosing to stay out on old tires for the final few laps, he lost the lead to teammate #11-Hamlin and was then spun by #29-Harvick in turn two with just 2 laps to go, making his car back hard into the outside wall and limp to the finish. Led a race-high 267 laps.
15)

#42-Juan Pablo Montoya Knocked the right-rear quarter-panel off #11-Hamlin sometime in the middle stages of the race.
16)

#99-Carl Edwards Plagued by problems with his car popping out of gear early and was conspicuously absent from the leaders except when he spun on the final lap. NASCAR did not throw the caution for this spin.
17)

#18-Kyle Busch Was the race’s biggest mover early, flying up from 22nd to 11th in the first 100 laps. He checked up during the race’s second caution for #22-Blaney and tweaked his right-front fender after contact with #31-Burton, but the damage was not serious. Reached 4th position by lap 277 and raced 3-wide with teammates #20-Stewart and #11-Hamlin coming off pit road under the race’s sixth caution for #15-Menard. He had just taken the lead from #11-Hamlin, who was forced to pit after contact with #5-Mears, when his steering stuck 5 laps later coming off turn two due to a power steering failure. The failure sent him spinning into the inside wall on the backstretch, and though he backed into the wall in the race’s seventh caution, he still salvaged a decent finish. Led 7 laps.
18)

#48-Jimmie Johnson Contact with #44-Jarrett under green was followed a few laps later by him spinning to avoid hitting #31-Burton in turn two which brought out the race’s eighth caution. Despite the spin, he gained two spots in the pits, but was not competitive in the final run to the checkers. Led 14 laps.
19)

#00-David Reutimann Made contact with a loose #6-Ragan and later with the right-front fender of leader #20-Stewart when he tried to stay on the lead lap in his final run in car #00.
21)

#6-David Ragan Got very loose at one point when he bounced off #00-Reutimann, but saved it.
22)

#7-Robby Gordon Brought out the second caution of the race (the first being the lap 50 competition caution) when he spun off #49-Schrader in turn four and stalled, but didn’t hit anything.
25)

#01-Regan Smith (R) The highest-finishing rookie of the race for the second time in 2008 and the first time since Auto Club in February.
27)

#28-Travis Kvapil Was driving the exact same car which #99-Edwards used to win the August 2007 Cup race at Bristol, albeit without sponsorship.
28)

#45-Kyle Petty Was very slow in the early-going, running a very conservative race, and was not involved in any of the race’s incidents.
29)

#41-Reed Sorenson Fell off the lead lap with an unscheduled stop around the halfway mark and was unable to get back into contention.
32)

#15-Paul Menard A strong top-15 run for him was ruined when he was involved in the race’s fifth caution sparked by #40-Franchitti and #26-McMurray, then was black flagged when his rear panel was coming loose on the track. When #40-Franchitti cut a left-rear tire in front of him, he was unable to get out of the way and spun #40-Franchitti in turn four, bringing out the race’s sixth caution.
33)

#12-Ryan Newman Problems began when he was forced to the back of the field for an engine change. The problems worsened when he was involved in the race’s fifth caution started by #40-Franchitti and #26-McMurray and, like fellow victim #15-Menard, was subsequently black-flagged for damage suffered in the crash. He also nearly wrecked the leading #20-Stewart late in the race when he got loose under him while going another lap down.
34)

#22-Dave Blaney As Blaney’s flu from Atlanta persisted, Mike Bliss was called upon to fill in for him for part of the race. He then spun off turn two to bring out the race’s third caution.
35)

#78-Joe Nemechek Was rear-ended by #84-Skinner under the race’s seventh caution.
36)

#44-Dale Jarrett Fell out of the free pass spot when he was forced to make a green-flag stop under green for a low tire just before the #40-Franchitti/#26-McMurray caution. Nearly hit the wall after making contact with #48-Johnson. Finished his 668th and final NASCAR Sprint Cup points race running around the apron of the track with all the fenders on his car.
38)

#43-Bobby Labonte Sustained damage in the race’s fifth caution when he followed #12-Newman into the pileup.
39)

#83-Brian Vickers Plowed the wall when he blew a right-front tire to bring out the race’s ninth caution inside the final 10 laps of the race.
40)

#84-Mike Skinner During the race’s seventh caution caused by #18-Ky. Busch, he rear-ended #78-Nemechek and ruptured his oil cooler, causing the oil to ignite and leave a flaming trail behind him.
41)

#49-Ken Schrader Had an excellent run going for much of the race’s first half and, like #15-Menard, was solidly in the top 15 when he was involved in the race’s fifth caution started by #40-Franchitti and #26-McMurray.
42)

#5-Casey Mears Was pinched hard into the outside wall in turn three by #11-Hamlin when he was trying to get his lap back under the race’s sixth caution, apparently sending him behind the wall.
43)

#26-Jamie McMurray Sustained some of the worst damage in the race’s fifth caution, primarily to the driver’s side of his car, the damage making it nearly impossible for him to drive the car.