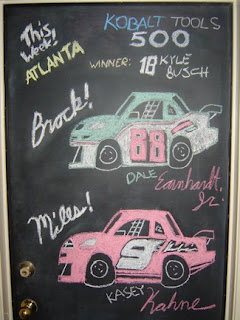 THE WINNER:
For the first time since #4-Al Keller won in a Jaguar at Linden, New Jersey’s airport road course in 1954, a foreign manufacturer scored a win in NASCAR’s top division. #18-Kyle Busch smoked the field, outlasting atrociously-hard tires, the strong machine of #99-Carl Edwards, and leading a race-high 173 laps to win with open ground over his teammate, #20-Tony Stewart.

#20-Tony Stewart Said he had no idea how he finished the race as well as he did and proceeded to complain about the hard tires in his post-race interview.
3)

#88-Dale Earnhardt, Jr. Was equally-vocal about the tires when his strong early run after starting outside the front row did not turn into a victory as the race went on. Led 62 laps.
4)

#07-Clint Bowyer Led a good part of the mid-to-late stages of the race, but found himself unable to contend with #18-Ky. Busch in the final laps. Led 52 laps.
7)

#29-Kevin Harvick His own handling problems forced him to save his brakes with 140 laps to go.
8)

#17-Matt Kenseth Rallied from a transmission change and a poor qualifying run.
9)

#48-Jimmie Johnson Nearly spun off of turn four early in the race as he, too, struggled with the hard tires, saying he felt “like Jackie Chan” because of how he had to manhandle his poorly-handling car.
14)

#12-Ryan Newman Was forced to make an unscheduled stop for a tire rub.
15)

#11-Denny Hamlin Made an unscheduled green-flag stop from 5th place just before the race’s third debris caution (and fourth overall) complaining about his hard tires.
16)

#7-Robby Gordon Mediocre finish, but much relief after NASCAR rescinded his Daytona penalty to move him back to twenty-first in points coming into the Atlanta event.
25)

#77-Sam Hornish, Jr. (R) The highest-finishing rookie of the race for the second time.
26)

#84-Mike Skinner Got the #84 into the field for the first time in 2008 after his strong qualifying run at Las Vegas, but was otherwise uncompetitive.
28)

#9-Kasey Kahne Wheel-hopped coming onto pit road early and then brought out the race’s third caution (and first not for debris) when he spun through the quad-oval grass right in front of leading #18-Ky. Busch. Led 1 lap.
29)

#55-Michael Waltrip Scuffed the wall early in the race.
31)

#22-Dave Blaney Suffered the same flu as Kasey Kahne during the race, but did not have relief driver Mike Bliss take over.
35)

#99-Carl Edwards Was still one of the strongest cars on the track, at one point 2 mph faster than the rest of the field, even though Robbie Reiser was filling in for his suspended crew chief, Bob Osborne. He was still leading on lap 269 when his car started to smoke, ultimately leading to an engine failure a few laps later. Led 33 laps.
43)

#19-Elliott Sadler Spun out twice to bring out the race’s fifth and sixth cautions around the halfway point, then finished off his car in the seventh caution when he slammed into the inside wall on the backstretch.