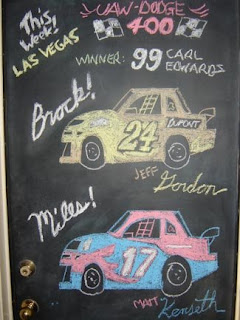 THE WINNER:
#99-Carl Edwards won his second race in a row with a convincing win at Las Vegas, surviving the final three-lap shootout at the finish to beat #88-Dale Earnhardt, Jr. Edwards bounced back impressively from an early pit penalty when his crew failed to catch an errant tire that rolled out onto pit road and narrowly avoided a second penalty when a non-FOX cameraman blocked the crew’s retrieval of another tire. Edwards was, however, penalized after scoring the victory due to a technical infraction, ultimately costing him some of his driver/owner points as well as the 10-point bonus for the Chase regrouping. Still, the victory stood, and he led a race-high 86 laps.

#88-Dale Earnhardt, Jr. Looked to be biding his time in the final laps in the second position, but spun his tires after the tenth caution so badly that #17-Kenseth and #24-J. Gordon split him to run second and third just before their contact brought out the eleventh caution. He thus got one more try which also proved to not be enough to catch #99-Edwards. Led 17 laps.
3)

#16-Greg Biffle Made a daring save on the restart after the fifth caution of the race, breaking loose off turn two and falling from third to seventh, but saving his car.
4)

#9-Kasey Kahne Fought through a bad case of the flu despite Jason Keller standing by to relieve for him, scoring an impressive top 10 finish.
7)

#6-David Ragan He and #28-Kvapil managed to stay on the lead lap and avoid all the carnage to score a pair of very surprising top-10 finishes.
8)

#28-Travis Kvapil Pulled off his impressive top 10 without any sponsorship on his plain white Ford.
9)

#8-Mark Martin After winning a controversial Nationwide race in which he spun teammate Brad Keselowski and former teammate Carl Edwards, scored a strong top-10 finish despite feeling “cranky” about fighting traffic for much of the race. Led 1 lap.
11)

#12-Ryan Newman Pinched #10-Carpentier into the outside wall on the backstretch to bring out the fifth caution.
15)

#42-Juan Pablo Montoya Nearly smacked the outside wall in the race after hitting it in practice.
20)

#17-Matt Kenseth Was the fastest car on the track after the second caution, but was concerned about his right-rear tire going flat at the 100 lap mark when he was running second. After the race’s tenth caution in the final laps, he and #24-J. Gordon split the slipping #88-Earnhardt, Jr. on the restart and raced side-by-side for second off turn two when #24-J. Gordon made contact with him, sending him spinning. He avoided wall contact, but lost several spots. Led 70 laps.
21)

#38-David Gilliland Nearly made contact with the wrecking #44-Jarrett under the race’s ninth caution.
24)

#83-Brian Vickers Spun off the nose of #5-Mears to bring out the eighth caution of the race, his car almost t-boned by #27-Skinner.
25)

#26-Jamie McMurray Brought out the first caution of the race when a wobbly #07-Bowyer forced him to check up, sending his car spinning and sliding through the grass in the tri-oval, bouncing off the grass at one point. His car also dropped a spring rubber onto the track just before the restart after the second caution. He did, however, manage to save his car from spinning again while racing #44-Jarrett later in the race.
26)

#07-Clint Bowyer Forced to a backup car after a practice wreck which damaged #45-Petty. When he got loose on Sunday, he made #26-McMurray check up, causing McMurray to spin through the grass for the first caution.
29)

#48-Jimmie Johnson Problems began early when he lost a lap under the second caution, a yellow which trapped all but 17 cars one lap down. Poor handling plagued him all day at a track where he’d won the last three times in a row, forcing slow, extensive pit stops. On lap 124, he was 11 mph slower than the leader.
30)

#27-Mike Skinner Qualified an outstanding fifth-place, but fell back and nearly collided with #83-Vickers in the seventh caution of the race.
31)

#45-Kyle Petty His car was damaged in a practice wreck with the sliding #07-Bowyer.
33)

#40-Dario Franchitti (R) Clipped the left-front of the spinning #66-Riggs during the race’s sixth caution, but still became the third-different highest-finishing rookie of the race in as many races.
34)

#24-Jeff Gordon Was fighting for second position with #17-Kenseth after the two had split the faltering #88-Earnhardt, Jr. on the restart after the tenth caution when he spun #17. He then checked-up and spun himself, slamming hard into the unprotected opening of the inside wall on the backstretch, hitting with enough force to rip the radiator out of his car and send it sliding across the pavement. The wreck brought out the red flag but, fortunately, he was uninjured. Led 19 laps.
36)

#66-Scott Riggs Was the biggest surprise of the race for much of the day, running in the top 10 for most of the day and running 8th with just over 100 to go. Unfortunately, he became the victim of the race’s sixth caution when he spun while racing #43-Labonte, the left-front of his car clipped soon after by #40-Franchitti messing up his handling. Led 2 laps.
37)

#00-David Reutimann Black-flagged not long after the start for a loose bumper after smacking the outside wall, then bounced off the wall once again without bringing out the caution near the 100 lap mark.
38)

#2-Kurt Busch His ill-handling car scuffed the wall just before #20-Stewart brought out the third caution, then Busch finished off his own car to bring out the tenth caution when his right-front blew in turn four while he was running 15th.
39)

#44-Dale Jarrett Spun by himself and backed into the outside wall in turn two to bring out the ninth caution of the race.
40)

#10-Patrick Carpentier (R) First start of the season went bad when he was pinched into the backstretch wall by #12-Newman, sending him spinning into the inside wall to bring out the fifth caution of the race.
41)

#77-Sam Hornish, Jr. (R) Smacked the outside wall early in the race, but the caution, the second of the race, was not thrown until some debris, likely from his car, was spotted a few laps later.
42)

#7-Robby Gordon Blew a right-front tire and plowed the wall about as hard as #20-Stewart in turn two to bring out the fourth caution of the race.
43)

#20-Tony Stewart Blew a right-front tire and plowed the wall very hard in turn three to bring out the third caution of the race, hitting with enough force that he felt a numbness from the hips down which, fortunately, passed. Led 6 laps.