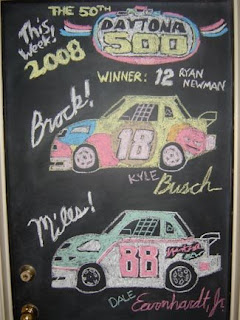 THE WINNER:
#12-Ryan Newman wins his first race since New Hampshire in the fall of 2005 in dramatic fashion, running near the leaders in the final stages and receiving “a push from heaven” from teammate #2-Ku. Busch going down the backstretch the final time. The push squeezed him past the fleet Toyota of #20-Tony Stewart, giving both #12-Ryan Newman and team owner Roger Penske their first restrictor-plate win as well as Penske’s first 1-2 finish. #12-Ryan Newman led only eight laps en route to his historic victory.

#2-Kurt Busch A terrible SpeedWeeks ended ironically sweet for him when he rallied from early vibration problems to give teammate #12-Newman the “push from heaven” to shove him to the victory on the backstretch on the final lap. Led 9 laps.
3)

#20-Tony Stewart Won the Nationwide race after nearly winning his Duel, saying he’d cut his long hair if he won this race. Though he ran strong and led on the final lap, it didn’t happen, for he moved low on the backstretch to block teammate #18-Ky. Busch just as #12-Newman was being pushed into the lead by his teammate #2-Ku. Busch. Was involved in the seventh and final caution when #5-Mears crossed his nose in turn one. Led 16 laps.
4)

#18-Kyle Busch Dominated the early-to-mid stages of the race, even at the expense of teammate #11-Hamlin, whom he blocked when the two were running away from the pack. Climbed 22 spots from 24th to 2nd in the opening 22 laps. An attempt to jump #31-Burton for the lead on the final restart was felled when he throttled back to avoid going beneath the yellow line, costing him valuable track position. Led a race-high 86 laps.
5)

#41-Reed Sorenson After a 4th-place finish in the Shootout and a runner-up to #88-Earnhardt, Jr. in his Duel, capped off an impressive SpeedWeeks with a 5th place finish. Led 5 laps.
6)

#19-Elliott Sadler Lost a right-front tire in the Duels and smacked the outside wall, then scrubbed it again in the 500 on Sunday without bringing out the caution, but recovered nicely in the final scramble to get a top 10 with his teammate, #9-Kahne.
7)

#7-Robby Gordon As controversy over NASCAR’s penalty for an unapproved Dodge nose #7-R. Gordon was given by mistake, turned in a fantastic top-10 run with a late-race rally to make it 6 Dodges in the top 10.
9)

#88-Dale Earnhardt, Jr. The race favorite after winning the Shootout and his Duel race could not keep up with the track changes or the leaders as the hot afternoon turned to night, worried about a vibration from what he thought were loose lugnuts, and wound up mired in traffic. Led 12 laps.
10)

#83-Brian Vickers Recovered from an early spin in the Duels to race his way into the 500 and snared a solid run.
13)

#31-Jeff Burton Unscheduled stop early in the Duels was far less of a problem than when he found himself leading on old tires for the final run to the checkers. Though the field swallowed him back up, he still scored a solid top-15 finish. Led 9 laps.
14)

#29-Kevin Harvick Worried just 7 laps in that there was something wrong with his engine, then sent #22-Blaney up the track late in the going, which caused the sixth caution of the race.
15)

#77-Sam Hornish, Jr. (R) Ran in the top 10 for much of the early stages, bounced back from a vibration problem and contact with #48-Johnson when he spun off turn two in the fourth caution, but stayed out of trouble in the final scramble, scoring an impressive finish as the highest-finishing rookie.
16)

#11-Denny Hamlin Won his Duel race after squeezing by teammate #20-Stewart, giving Toyota its first Cup win. Suffered some damage to his left-rear quarter panel in the fourth caution, then a little more in the sixth after running strong in the early laps right behind defensive teammate #18-Ky. Busch. Led 32 laps.
18)

#00-David Reutimann Recovered from jumping the start in the Duels to make the race as one of the top three fastest cars, he and #55-Waltrip helping their teammate #44-Jarrett race his way into his final 500 by drafting him up to the front.
19)

#1-Martin Truex, Jr. Spun in the smoke thrown up after #48-Johnson spun off turn two, but didn’t hit anything.
21)

#07-Clint Bowyer Was spun off the nose of #42-Montoya with 17 laps to go in the race’s fifth caution, but fortunately did not hit anything. Was one of several cars with the right side of the car heavily scratched from wall contact. Led 4 laps.
25)

#48-Jimmie Johnson Won the pole for the Daytona 500 for the first time since 2002, but handling problems and an uncharacteristically-slow pit stop when his jack fell later foreshadowed on a spin off the nose of #77-Hornish, Jr. in turn two with 23 laps to go that put him in an even deeper hole, bringing out the fourth caution. Led 1 lap.
28)

#55-Michael Waltrip Outside polesitter ran golden wheels for the first pit cycle, leading the first lap in his Toyota. Led a total of 3 laps.
30)

#28-Travis Kvapil Sustained damage in the sixth caution of the race when #22-Blaney slid up the track.
31)

#8-Mark Martin Lost two laps when a tire cut down right after the restart after a debris caution on lap 80 only to get squished into the wall in the sixth caution caused by #29-Harvick knocking #22-Blaney loose in the turns.
32)

#42-Juan Pablo Montoya Spun #07-Bowyer off his nose in the trioval with 17 to go, causing the fifth caution of the race.
33)

#5-Casey Mears While running third in the final laps, he accidentally crossed the nose of #20-Stewart who was running on his outside, steering him hard into the outside wall and bringing out the seventh and final caution.
36)

#17-Matt Kenseth Was slammed into the tri-oval’s outside wall by teammate #6-Ragan when he merged without being clear of his car, bringing out the third caution of the race (the previous two were for debris). Led 1 lap.
37)

#01-Regan Smith (R) Bounced off the outside wall similar to #19-Sadler in the late going and did not bring out a caution, either.
38)

#22-Dave Blaney Blown engine in the Duels foreshadowed on his involvement in the sixth caution on Sunday when he was bumped out of the groove by #29-Harvick and slid up the track, collecting #8-Martin, #28-Kvapil, and #11-Hamlin. Led 1 lap.
39)

#24-Jeff Gordon Ran decent early on, but handling problems turned much worse when his suspension failed on pit road on lap 154. Led 5 laps.
40)

#34-John Andretti Raced his way into the 500 on the final lap of his Duel after taking 4 fresh tires, but was not competitive on Sunday.
41)

#78-Joe Nemechek After being one of the fastest cars in qualifying, his car was felled by a loose lugnut on the track which punctured his oil cooler, costing him several laps.
42)

#6-David Ragan Annihilated the right-front of his Ford by crossing the nose of teammate #17-Kenseth entering the tri-oval, bringing out the third caution of the race and the first for an accident (the first two for debris).
43)

#87-Kenny Wallace After racing his way into the Duels to give Furniture Row Racing an unprecedented two cars in the Daytona 500, this car never really got up to speed, ultimately being black-flagged for not meeting the minimum speed requirement.