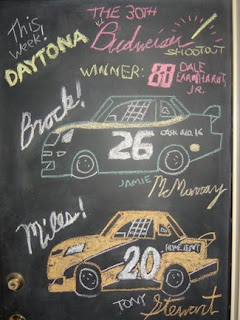 THE WINNER:
#88-Dale Earnhardt, Jr. won the first race of any kind since his 2006 victory at Richmond, passing #20-Tony Stewart coming to the white flag to snare his second Budweiser Shootout. He led a race-record 47 laps and fought off strong challenges from #20-Tony Stewart and #48-Jimmie Johnson in the final 3-lap dash to the finish. #88-Earnhardt, Jr. first took the lead on lap 7 over former teammate #55-Michael Waltrip and hardly relinquished it after that by running very high around the track. #88-Earnhardt, Jr. was concerned over a vibrating drive train in the final laps, but the car still held together.

#20-Tony Stewart Easily #88-Earnhardt, Jr.’s biggest competition, racing side-by-side with #88 for several laps in the closing stages. Drafted by #88-Earnhardt, Jr. all by himself with 9 to go to take the lead, but #88 came back to pass him coming to the white flag. Led 9 laps.
3)

#48-Jimmie Johnson Raced a backup car after practice crash; used a short track car. Despite saying the car was a “brick” in segment one, came back to run very strong in segment two after lagging in the back with teammate #24-J. Gordon.
4)

#24-Jeff Gordon Raced a backup car after practice crash; used a short track car. Lagged in the back of the pack with teammate #48-Johnson in the first segment. Led 1 lap.
5)

#22-Dave Blaney Led a fair amount of the second segment early on by inching past #88-Earnhardt, Jr. on the restart, gained 3 spots off pit road under #38-Gilliland caution to take the lead again, but was shaken from the draft by the leaders. Led 7 laps.
8)

#11-Denny Hamlin Durability of his car was tested from damage sustained in #26-McMurray incident that flattened the right side of his car and was later almost hooked into a spin on backstretch by #07-Bowyer.
10)

#9-Kasey Kahne Was not damaged severely from contact with wrecking #38-Gilliland.
11)

#55-Michael Waltrip Inherited pole from damaged #2-Ku. Busch and led lap 1, but overshot his pit stall in the second segment. Led a total of 2 laps.
12)

#12-Ryan Newman Raced a backup car after a practice accident with several drivers and wound up spinning with #12-Newman with 7 laps to go in the fourth and final caution.
18)

#2-Kurt Busch Raced a backup car after a practice accident with #20-Tony Stewart. An unscheduled green-flag stop in segment two was costly; he had made contact with #38-Gilliland which led to #38 cutting a tire and hitting the wall. He got his lap back, but then spun from the top 10 in turn 3 to bring out the fourth and final caution of the race with 7 laps to go. The only damage was to his valence, which was ground across the apron as he spun.
19)

#38-David Gilliland Brought out the third caution of the race when he blew a right-front tire and hit the wall off turn 4, bouncing off #9-Kahne in the process, and was then rear-ended by drafting #1-Truex, Jr. and #16-Biffle. Led 2 laps.
20)

#1-Martin Truex, Jr. Was drafting behind #16-Biffle when he rear-ended #38-Gilliland, wrecking his car as well in the third caution.
22)

#26-Jamie McMurray Saved his car from spinning in segment one after contact with #38-Gilliland, but wrecked in segment two after merging on top of #11-Hamlin in the tri-oval, annihilating the right-front of his car in the second caution of the event and the first in segment two.
23)

#21-Bill Elliott Blew a right-front tire in turn 1 after lagging back in the first segment, forcing the final 5 laps of segment one to be run under the race’s first caution. Car stopped against the wall and was very difficult to drag down the banking.